Beach Toweling: When People Take Their Seaside Vacations Back to Work

Sun's out, the temperature's just hot enough for a good tan, but not high enough to feel like Mordor. Waves are gently lapping on the shore, and you’re looking at an azure blue ocean. The air smells like freedom and sun lotion.

You take your slippers off and make your first step in the sand. Ah, finally! With Covid restrictions gone, this is the first beach vacation you've taken since 2019!

You spot the perfect beach bed for the day. There's no one around, so you rush over to grab it before anyone else does. But as you get closer, you realize there's a beach towel covering the bed.

The one next to it? Same, Manchester United’s logos smirking down on you from a sandy beach towel.

And the one next to it? Also taken.

Oddly enough, though, there's no one around. Two-three people, scattered here and there. But generally, it's just you and the ocean.

The only logical conclusion you can draw is that people have left their beach towels there to save up their spot -- it's either that or they're all mermaids and mermen running a trip to the bottom of the sea right now.

Welcome to beach toweling, where everyone's saving up a seat they'll only use "later" at an undisclosed, vague time in the future. Beach toweling is a way to ensure you get prime beach real estate without having to show up at the crack of dawn. All you have to do is throw your towel over a spot you want, and no one can use it until you come back. 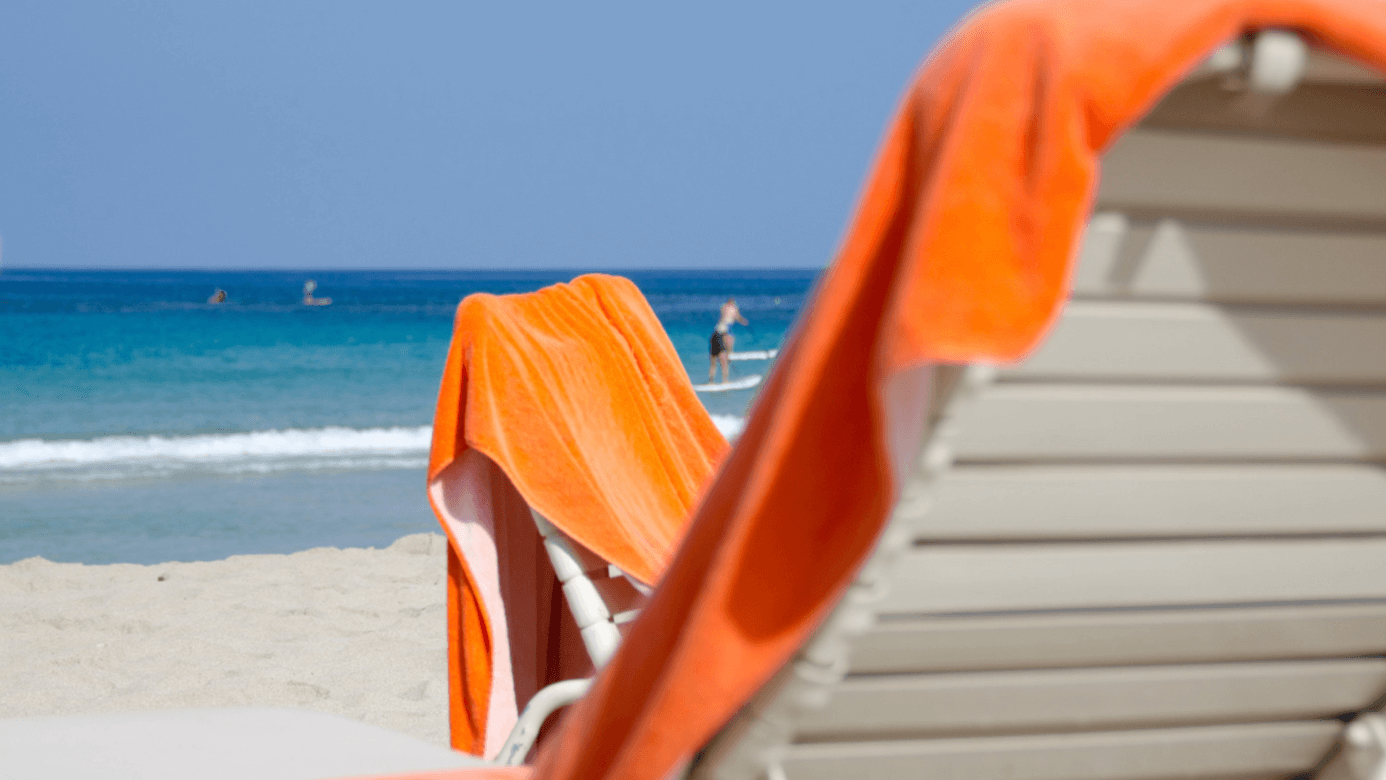 Boom, it's like a reservation, but free -- and a bit cheeky.

As convenient as it may sound, beach toweling can get a bit annoying when done too often. It's best to limit yourself to one spot and not monopolize the whole beach to yourself. It's also rather rude to do it when the beach is crowded.

Beach toweling is a common practice among beachgoers, and it's been going on for years. It has become so popular that some people even decided to take it back to their hybrid workplace (and very aptly rebrand it as "office toweling", which is equal parts confusing and rather hilarious if you imagine Hawaiian shirts, flip-flops, and Mojitos at the office).

Office toweling works in the same way as beach toweling does: reserving a spot without actually having to be there. We've all done it one way or another, at the office or at the beach. Whether it's getting an early start on a project or simply staking claim to the best parking spot, toweling can be quite useful.

And on the surface, it doesn't look evil or even upsetting: it's just human beings wanting to save up their desk for when they come into the office.

Once you get past the surface level you'll discover there's sea urchins under the rock of office toweling. You see, the entire concept of flexible work was built to increase employee engagement, and to make sure that those who chose a different work environment could still be part of the team.

But when employees throw their imaginary towels on very real desks and leave them there, they deny their colleagues the chance to use that spot even if the desk is open.

The result? Employees who are stuck in a quicksand of disengagement, while their towels-covered colleagues enjoy their everyday sunsets on the beach. It's easy to get bitter over the fact that every time you come into the office you have to spend your day in a corner on a beanie bag or in the kitchen, bathing in the onion soup and cabbage flavors of your workmates' lunchtime.

Add all this on top of the fact that beach toweling opens the gates to all sorts of quirky practices (such as accumulating objects on desks to make employees feel like they don't have a place of their own.), and you've got a full-blown sand storm waiting to happen. 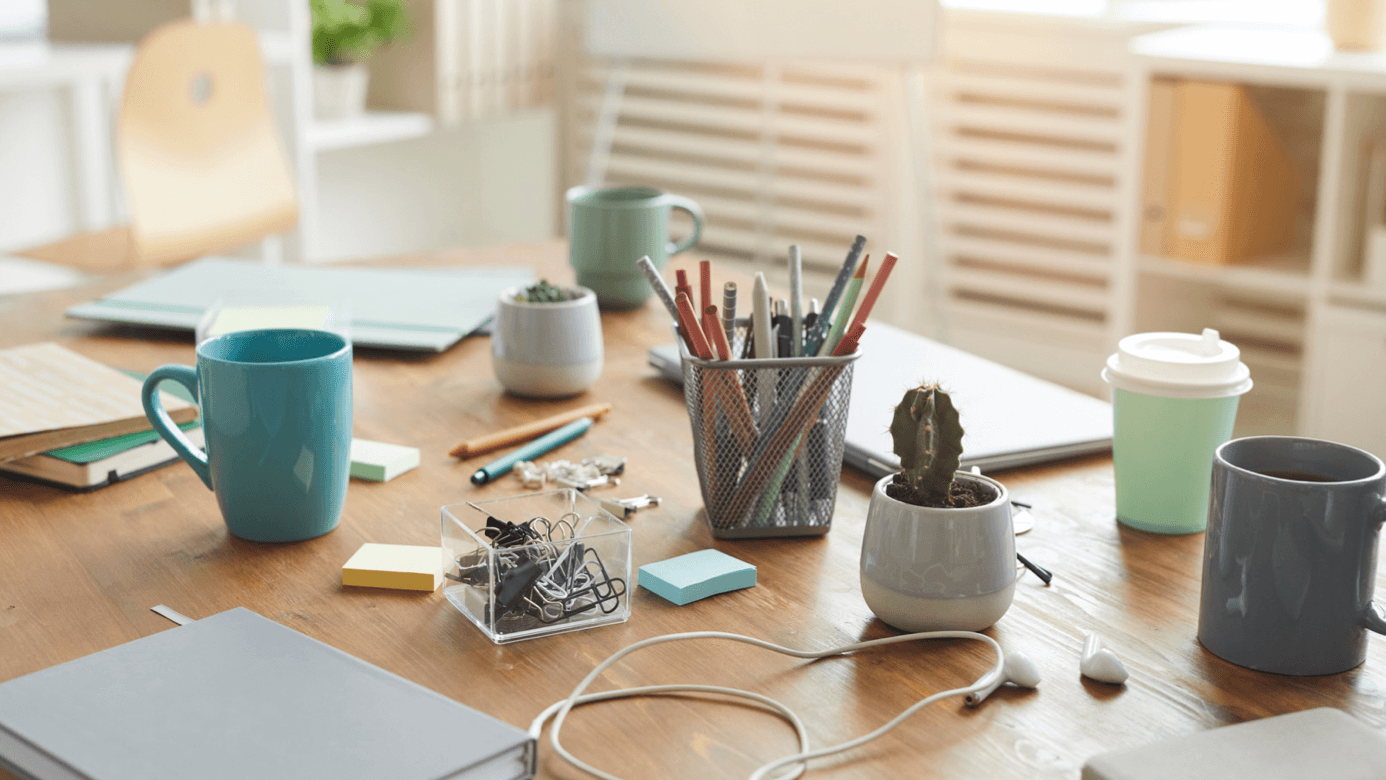 At the end of the day, office toweling is just another example of how we can become disconnected from our work, and potentially forget why we show up to work in the first place. It can be an issue for employees who actually want to come into the office -- and an issue for companies that pay rent so employees can leave their (metaphoric) towels on a desk and only come into the office once in a Blue Moon.

Obviously, this kind of situation can leave everyone feeling a bit...salty.

How to Banish Toweling from Your Organization

So what to do when you're faced with an office full of “towels” -- and no people?

Well, you can ask your employees to... not do it. Believe it or not, most people aren't even fully aware of the consequences their actions have. Selfish? Yes. Malevolent? Probably not.

Even so, the force of habit can very frequently win over anything else. So the best solution you have is to implement hybrid work software that helps you monitor who's in the office and when, as well as limit how many days in a row someone can book the same desk. This kind of tool can help you build flexi-work policies that democratize the office space and ensure everyone has an equal chance of having their own spot.

Tools like this also help you build an organizational culture where employees actively leave desks open when they don't need them, or even use desk-sharing as part of your work flexibility policy. By making sure that every employee knows there's a rotation policy in place, you'll be creating an environment of trust where employees don't feel the need to protect their desks from other colleagues.

Finally, you can provide plenty of additional services that make it easier for your employees to leave their towels at home -- or wherever else they plan on spending the next summer. This could be anything ranging from discount gym memberships and access to corporate benefits to yoga classes and meditation groups.

We're all different. We want different things from our work flexibility. As an HR, Facility Manager, or team lead, it's your job to make sure those differences are taken into account. Because the only thing worse than imaginary towels on desks is when those same towels prevent some of us from reaching our full potential. So let's say no to office toweling and feeling like you don't have a place in the office -- and let's say yes to inclusion, equality, and a better way of working.

It's time to reclaim the office -- one mythic towel at a time! Contact us to get started.